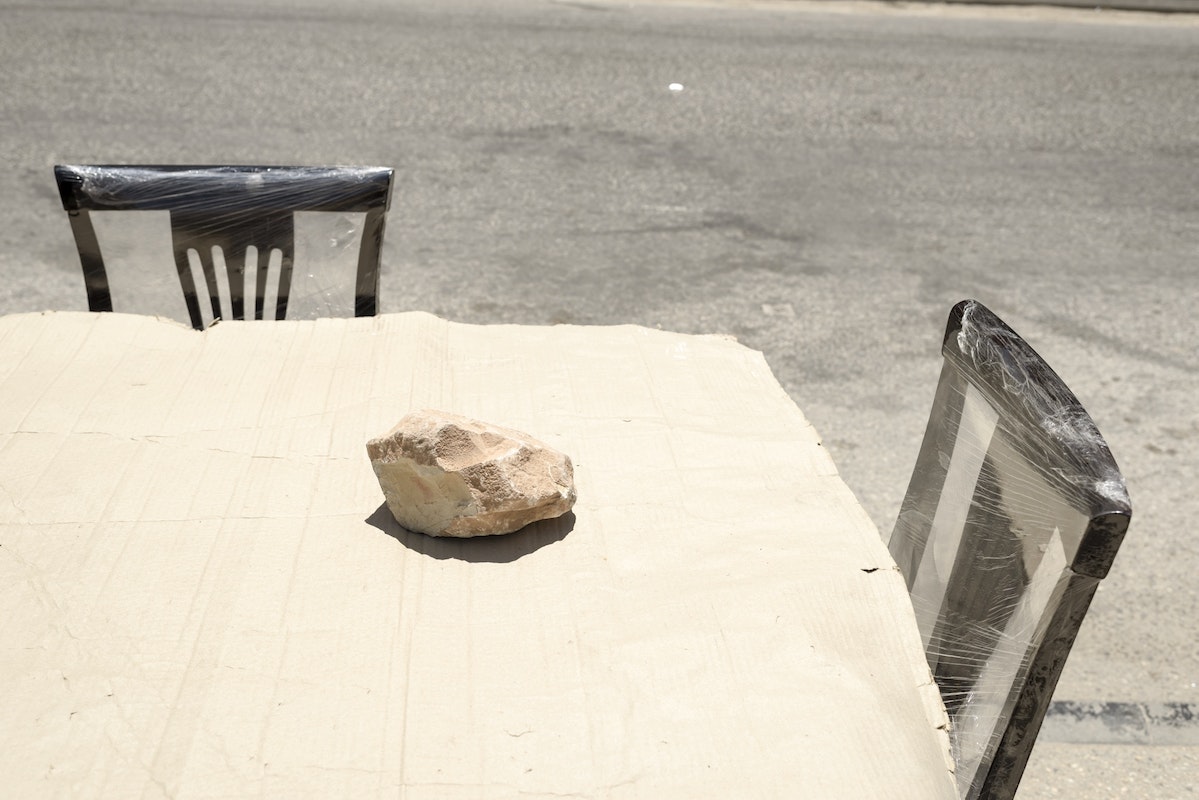 Ad van Denderen often revisits places, people and histories and is known for his long-term projects on issues like migration, apartheid and the Israel-Palestine conflict. He worked as a freelance photographer for news media including Vrij Nederland, NRC Handelsblad, Stern and The Independent. His work has been exhibited and collected by the Stedelijk Museum Amsterdam, Huis Marseille, the Rijksmuseum, Foam, Nederlands Fotomuseum and Fotomuseum Winterthur, among others. In 2007 Van Denderen was awarded an oeuvre prize by the Netherlands Foundation of Visual Arts. His publications include Peace in the Holy Land (1997), Go No Go (2003), So Blue, So Blue (2008), Occupation Soldier (2009) and Stone (2017).

Hans Gremmen is a graphic designer, and a co-founder of publishing house Fw:Books. He works in the field of photography, architecture and fine arts for clients such as Office for Contemporary Art, Norway, Aperture Foundation, Roma Publications, Darat al Funun, and TUDelft among others. He has designed over 200 books, and won various awards for his experimental designs. Among them a Golden Medal in the Best Book Design from all over the World competition.

The Media Communications department of Webster Leiden Campus and Transformations present the third text in the series based on the public talks Documentary Today: Transmedia and Collaboration. This time we publish extracts from a conversation with graphic designer Hans Gremmen (of the publishing house fw:books) and photographer Ad van Denderen, which took place at Huis Marseille photography museum. The audience was invited to lead a two-hour dialogue with the guests, focusing on the book Stone and the exhibition Jerusalem Stone – the result of Ad van Denderen’s 25 years of documenting daily life in Israel and the Palestinian Territories.

How did your collaboration on the photobook Stone begin?

Ad
I saw the beautiful book Cette montagne c’est moi by Witho Worms at The Best Dutch Book Designs 2012. It was designed by Hans. I was very impressed and decided to approach him. I also wanted to try a new way of collaborating with a publisher where communication could be more efficient than with cases I had had in the past, for example, with Go no Go where six publishers were involved, and everyone wanted the book to be something else.

Hans
I didn’t expect Ad to be contacting me, as in the past he had collaborated with big publishers. I was immediately triggered as I realized that he wanted to make something radically different from his past publications. The first meeting was very fruitful and also surprisingly short. Ad brought a little box with all the photographs printed in a small size. We went through all of them, and realized that this unusual size worked. That led us to the idea of making it as a pocket book. Sometimes you just immediately know what kind of a book it should be.

Hans, can you talk us through the design process of the photobook?

PHYSICAL DUMMY
A lot of the design is done on the computer, but I very quickly produced a totally blank dummy so that you have a physical copy in your hand; the only thing that is not there is ink, but still you can feel the paper, the binding, the size. It was important that this copy be created by the company that would do the final print run, Wilco Art Books, so that we would know exactly what we were going to get.

LAYOUT AND EDITING
Normally design is editing, but that had been done by Ad himself, together with Hans Aarsman. They went through thousands of negatives. I changed maybe just four of five images, so all that was really left was to lay out images. Sometimes you see two or three photos on a spread, and three or four chapters in the book have a grid of four images maximum. But it could get too crowded with too many images, and this constant grid could lead to a viewer losing focus. At the same time, it could be tiring for a viewer to have a new design decision in every spread. So, the layout had to find a balance between being pleasing and predictable and uncomfortable, in order to keep the viewer’s focus.

COVER
The nicest aspect of the design happened at Huis Marseille, when I decided to use one of the stones that Ad brought from his travels and was planning to use for the installation. These were actual stones from incidents where Palestinians had thrown stones against heavily armed Israeli troops. I wanted to reproduce one on the cover in the exactly same size. I came to the museum and I put all stones on top of the dummy and photographed them in order to understand which one worked best.

Another element of the cover is a cutting in the shape of a stone, a hole that echoes the method that the Israeli army used in 2002 in order to take a Palestinian city Nablus. They used a stone drill, methodically drilling through whole housing blocks and making people leave their houses. It’s a violent act, and it creates an extra shape in a wall that you can’t control. I used this idea of applying force and creating holes and cracks.

I also wanted to play with paper: the top of the cover shines, but its inside is very rough, and through the cutout you perceive the contrast. I hope it gives an uncomfortable feeling.

Normally the cover should tell everything and nothing about the book at the same time. We went for literally having the stone on it, but we realized that the book is much more complex than that: it has seven very different chapters. The solution was to place an index on the back cover. I hardly ever do such indexes, but in this case it was important to show the diversity of content, and a viewer also can immediately see that the work has been ongoing over many years.

TEXT
We wanted the book to be more informal, personal, and so for texts we used recollections of encounters and situations Ad had built up during his travels. They are nice to read almost as short stories on their own. Ad sent me a couple of his texts at the beginning of our dialogue, and I immediately asked him: “Do you have more?” He had some written, and he also wrote new ones for the book.

Ad, How did you work on the exhibition?
When I received the invitation from Huis Marseille, I went to the museum with 200 photos, and began working from there, with the curator Saskia Asser. We met for about five sessions. The idea of chapters was there from the start and we began building up maquettes of each space, beginning with older black-and-white images on the first floor of the museum and going up through the building with newer works. The visual language of images also gradually changed from floor to floor, from year to year – beginning with panoramas and photos made with a Leica M6 to photos made using 6x7 Mamia.

Hans, how did you experience the exhibition as compared with the book?
The book launch took place on the same evening as the opening. I was excited and nervous, because people could see the same images in the book and on the wall, a sort of masterproof. I had a conversation with the curator where we agreed that we were dealing with the same problems but in different spaces: museums have rooms and books sections, and you have to work within these frameworks. In the book, in every chapter there is a different atmosphere. The same with the show: entering a new room, you have to recalibrate yourself.

I also saw some nice new combinations of images at the exhibition. For me it was a fresh perspective on the material I knew so well. Also, for a long time for me these were just prints in a box, they didn’t have any fixed size, and in my head I always connect an image to a size. So it was fun to walk around and see if my idea was right or not, as compared to actual prints.

Ad, what skills do you think a photographer needs to have in addition to the ability to take photos today?
Ideas about a topic and the research have become of much greater importance than they have ever been. It is also important to get skills that will allow you to tell a story in a better way, namely editing, filming and writing.

The text was prepared by Daria Tuminas, coordinator of the Media Communications department of Webster Leiden Campus, and initiator of the Documentary Today talks.