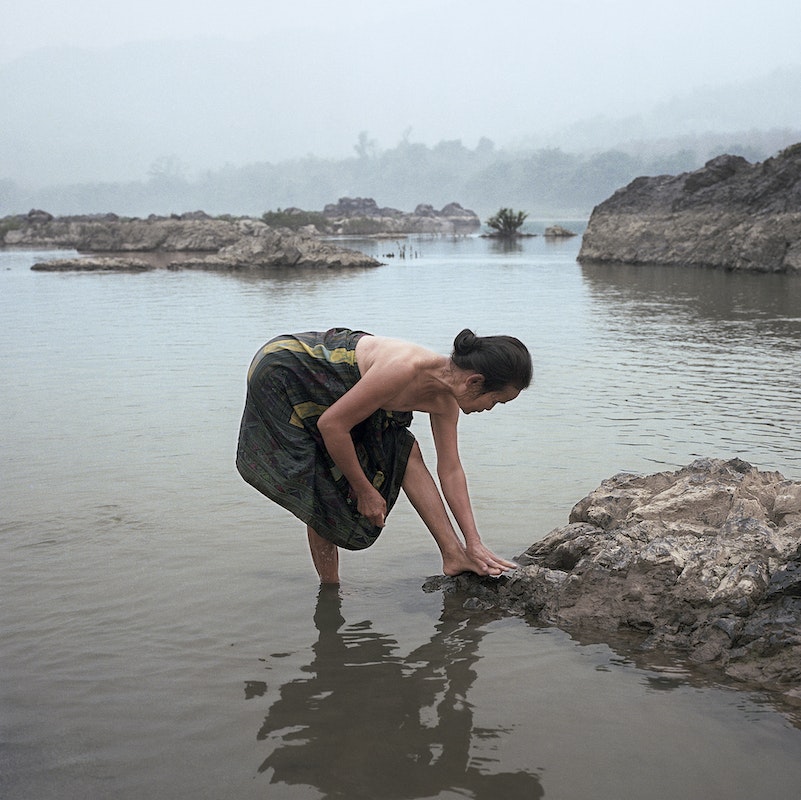 Ore Huiying's project from Mekong – The Mother of Rivers. © by photographer.

I am Ore Huiying.

I come from the tiny island of Singapore, where I’m based right now.

Photography is for me a way of expressing my curiosity about the world we live in; I use it to tell stories. orehuiying.com

Tanya Habjouqa
”A good edit is one that has magic, that captures you from the start and inspires suspension of disbelief….” Read more

Changes and Connections in Photography - with Souvid Datta

Ore Huiying shot many of the photos for her project ‘Mekong – The Mother of Rivers’ with an analogue medium-format camera, but she faces the future firmly and is super-aware of what it takes to be noticed in a fast-changing visual environment. After doing a photography MA and working for three years in London, she’s now back in her native Singapore, focusing on stories that investigate the human cost of development in Southeast Asia. Ore’s work has appeared in Le Monde, Ojo de Pez magazine, the British Journal of Photography and many other publications, she has exhibited internationally and received many accolades, and through it all she remains committed to stories about the region that don’t often get told.

”Working with a medium-format camera suits my personality,” she says. “It forces you to slow down, to be really observant, and to think about a situation before shooting. I like to have time and space to be immersed in an environment.” She first started using a medium-format camera while shooting a story about a high-speed train project in Laos which had ground to a halt. “That was a challenging subject to photograph,” she says. “Nothing was there. Things were moving slowly or not at all. Shooting with medium-format reflected the situation, as the images were very quiet, very subtle.” Although Ore still uses digital for commissioned assignments, she often uses analogue for her ongoing personal work in Laos, examining the effects of development projects on everyday life.

“I have a level of engagement that someone from outside the region might not have.”

Project: Mekong – The Mother of Rivers

Landlocked Laos, bordered by China, Vietnam, Cambodia, Thailand and Burma, is one of the world’s poorest countries, but has ambitious plans for development. One of these—despite strong opposition from Laos’s neighbors—is the construction of a large hydroelectric dam on the Mekong River, which runs through all six countries. The dam will damage the Mekong’s ecosystem, and disrupt food security and the incomes of millions of people who depend on the river for their livelihoods. Communities will be displaced. Ore Huiying traveled by boat through the area designated as a reservoir for the dam, encountering villagers whose lives will be affected by the project.
See the project

Ore believes that her personal connection to the subject helps make the stories she shoots for this project more convincing. “I have a level of engagement that someone from outside the region might not have,” she says. “This bond helps me explore beyond what is on the surface, beyond what is being covered in the news.” In many cases, a side-effect of development is that people are deprived of their livelihoods and lose contact with communities they grew up in, as a result of government decisions over which they have no control. Coming from the region, and with similar experience (her family had to move from their farm to the city when the Singaporean government wanted the land for development), means Ore can relate personally to her subject. Yet she sees the issues as having not only regional, but global relevance. “Similar stories are happening all over the world,” she says, “in places like Africa and South America.”

This raises a wider political issue. Ore feels that, as a small region, Southeast Asia doesn’t always get the attention it should. “What is happening here doesn’t have global impact, which makes it all the more crucial to bring the stories to a global audience, in order to change perceptions and increase awareness,” she says. The internet and social media have facilitated connections, but not solved the problem. “Before the internet there was no chance at all for local photographers to connect with editors or curators in the West,” says Ore. “But even now, there’s still a barrier. I find that editors still want to see a very stereotypical portrait of somewhere foreign: Aids, slums, prostitution.” She finds that sidestepping the gatekeepers by using social media and other platforms doesn’t offer an easy option, because “the outlets that are interested in showing these stories don’t pay.” Her personal project is entirely self-funded, using income from her commissioned work.

“A still photo gives you the opportunity to be by yourself with an image and be totally absorbed.”

For the future, Ore is interested in creating more multimedia projects. “Sound and video add another dimension to a story,” she says. “They change the way you think about photography, especially because at times it becomes a collaborative process with other people.” And as for still photography? “I like to think it has a place in the future, and I think it should. A still photo gives you the opportunity to be by yourself with an image and be totally absorbed.”

"How do you go about editing a long-term documentary project, when you have so much material, and what makes a good edit?"

A good edit happens when you select the most appropriate photos to develop the narrative and concept behind a project. In order to reach this goal, you can think about your project as if it were a movie. Start with conceiving a simple and clear structure.

For example, define a suitable introduction to attract your audience’s attention and bring the viewer into the subject. You don't need to provide all the information at that stage, but it is important to contextualize and start providing some elements to your audience. Then develop your story, present its main characters, bring onto the table the main aspects and events. Like directors and DPs do in movies, you can play with visual elements, like different depths of field or different lights, to make the story more fluent, or to highlight certain moments and emotions. Finally, define a conclusion. It could include your point of view, it could include a message for you audience, it could be ‘open’, or plant a question. But it must be powerful and meaningful.

This is just an example of an editing structure. Like in movies, there are no predefined rules to telling a story and every project has its own specific needs and characteristics. Still, I believe it is always very important to focus and dedicate the proper time to defining a project’s backbone and objectives before starting to play around with pictures and their editing.

That said, the other fundamental aspect of editing, in my opinion, is to consider in which context you are presenting your project. If you wish to present it online, maybe on your website or at a photographic contest, you should select a relatively small number of pictures. The edit will therefore be very clear and powerful. There is no space for transitional photos, unless they are really functional to the narrative. There is no space for weaker photos. Every detail counts and you should be sure to include all the fundamental information while developing your narrative or concept. A photobook, on the other hand, is driven by other dynamics (more photographs, a paper support, etc...) and therefore requires other lines of reasoning at the moment of defining a suitable edit.

In the end, after several hours of editing, when your mind is on the verge of explosion, it might be good to put your editing work on hold and ask the opinion of friends and colleagues. After having listened to their point of view, ask them specific questions about those aspects that you consider more delicate or relevant, and take notes of their feedback. It might result in an important investment of time, but the more people you show your work to, the more chance you have to develop your ideas and add something to it.

Finally, always keep in mind that there is no scientific solution for editing. So it is as important to develop your own editing process as time goes by as it is to follow your gut feeling and vision. Good luck!

Your question is the burning question for most of us....I look at photography and writing as two very similar processes. Editing a long-term project can incite the same angst as writing a novel, thesis, or anything that truly matters to you. Every photographer/writer has their process....be it a physical meandering, walking in circles. Procrastinating. Groaning. But that aside—I find that using cheap prints to create a tangibility can take the process further. To touch, to pair. Diptychs/triptychs. Then the most important part: this requires a certain brutality of culling. There is no set answer to this, I think everyone has to develop their own path, but I will share a few of my go-to approaches when editing a long-term project.

1) Find a fellow photographer/curator or editor you trust, who you can show a sense of vulnerability to and know they will come back to you in most honest way possible. One who does or would do same with you, a reciprocal relationship. But limit that number....too many voices prove counter-productive. I try to stay in the realm of three or so....

2) I go to book stores and stare at the overwhelming numbers of average or sub-average books and think how much I don't want to create something like that. And then I look at my favorite collection of photo books and let the work sit with me, and I dwell on what makes it so timeless, something that makes me return loyally in countless visits.

3) I read with a lot of respect and interest your perceptions of how some western editors can take a reductive approach to imagery from your region. As a Middle East based photographer, I can relate to that. So another element I find when editing is to sit with someone I respect from the community I am documenting, someone with a super-critical take. My secret go-to when documenting in Palestine is a Palestinian filmmaker who lays it on with sincere appreciation and brutality. This is key for me....and enhances my editing process, though it does make it lengthier.

A good edit is one that has magic, that captures you from the start and inspires suspension of disbelief. Makes you want to keep going, creates a sense of flow. That has space, that leaves questions, that answers others. It sometimes provokes tension, humor, bleakness. But also space. I also find that when I have done my near-final culling, where it feels that I have bloodied the project before Frankenstein rises....that those images in the last culling are good to keep in the vault to supply to various edits once you publish in multiple places. Aside from that, your question requires a Yoda. And if you find an editing Yoda---share his advice with me too please. That said, your river project is amazing.  I love the tenderness and respect you have of people you photograph, and you mix in the land and the tension of what is coming amazingly.