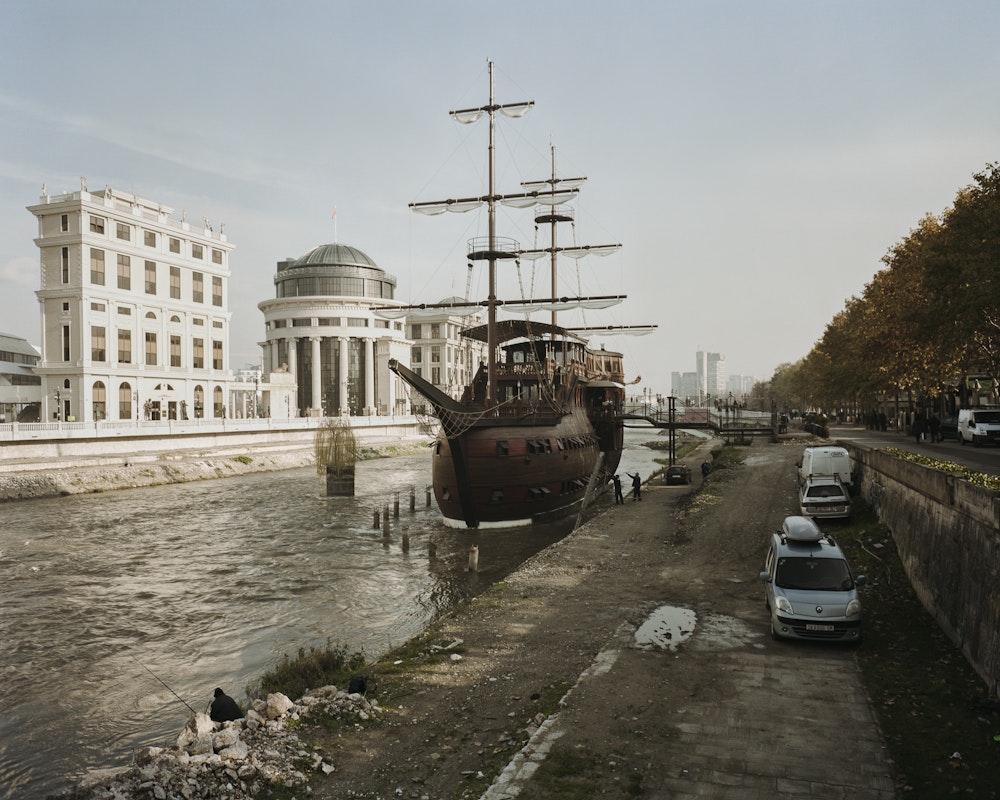 I come from Poland, and study at the Polish National Film School

Photography is for me the first tool of inquiry I was introduced to. At the moment I’m not really sure if that is my main tool any more: I think I’d love to go much further, but basically what drives my interest is the searching nature of photography and other visual tools.

Visually arresting images are for Michał Siarek the starting point for setting his audience off on a path through the complex national and geopolitical issues entangling Macedonia today. “I’d like to take you on an adventure at first, without revealing the main core of the issue, to show you the beautiful and mesmerizing place that is undergoing a struggle which cannot really be described very briefly, and then to expand the narrative slowly, and let it unfold,” he says.

Like a tourist who is captured by the sight of the capital and the landscape, then notes the oddities, then becomes curious about the people, politics and protagonists in the drama, the audience is drawn ever deeper into the issues: true and false history, the manipulation of myth to distract people from current concerns, mass surveillance of the local population, and more. “There is a huge amount of material that could be provided on a variety of layers, so ideally I’d like to give people the opportunity to get as deep as they liked, without overloading it,” says Michał. Different layers also allow the inclusion of interviews with people who did not want to be photographed. “A whole layer of whispers from people who are scared,” he says.

Alexander is a multi-platform documentary project focused on the relationship between history, politics, myth and popular culture, and the attempt to combine all this in the construction of national identity in the Former Yugoslav Republic of Macedonia. The trigger for the project came in 2010, when Michał first saw a 25-meter-tall figure of Alexander the Great on horseback, in the Macedonian capital Skopje. It turned out to be part of an extensive government project to rekindle first in the capital, and then in the entire country, a sense of connection with supposed ancient roots. One of the most recognized and powerful rulers in history was being acclaimed as the father of the present Macedonian nation, yet modern Macedonia might be seen as just a young, poorly developed, post-Yugoslav country, embroiled in complex issues surrounding national pride, cultural history and contemporary suppression. Thus Michał’s journey of inquiry began….
More about the project

It’s not only about images, but the variety of exposure: different forms bring the issues to a variety of audiences.

A multi-platform, transmedia approach is called for. Michał is preparing a photobook and exhibition, but is most eager to expand beyond that. “It’s not only about images, but the variety of exposure: different forms bring the issues to a variety of audiences,” he says. “A multimedia format can be delivered directly to your pocket, to your mobile device, and can be seen for free without the whole impact of costs related to an exhibition or book. That would make the project more democratic.” Not only does this mean reaching an audience beyond any photo-world clique, but also means that comment about current issues can be ongoing, and that other people could contribute it. “Ideally, the project would be an open archive, which would allow people to explore particular aspects through pre-curated or pre-navigated roads,” says Michał.

The most fascinating aspect is the shift of the whole paradigm between what is real and what is artificial, how we perceive the borders within photography.

The project has caused Michał to think beyond the confines of photography, both in his own work and in a consideration of the future of the medium itself. “I came with a background that dedicated me to photography, but have come to understand that it is not necessarily the best medium for what I would like to achieve,” he says. For Michał, the emphasis should be on the story, not the author, and the way forward in realizing that aim lies in combining photography with other media, perhaps even other technologies. “The most fascinating aspect is the shift of the whole paradigm between what is real and what is artificial, how we perceive the borders within photography. Since all soldiers are wearing GoPros, and games are getting much more real, that is totally shifting the paradigm of perceptions.”

That is not to say that documentary photography is dead. “This brings it alive, makes it valid again, and appeals to a wider audience,” says Michał. “It doesn’t collide with a more technically advanced approach, it’s just different. It’s exciting to see the opportunity of going beyond and focusing on the story itself, rather than being limited. But the beauty of photography, and pleasure of creating the image with simpler means, that’s still exciting.”

Michał’s primary focus is the audience, and how to communicate with the audience of tomorrow.

Michał’s primary focus is the audience, and how to communicate with the audience of tomorrow. He sees it as a natural development to obtain new skills, ones more suitable to engaging with and communicating to future audiences. “The audience will demand a new approach to be more appealing. Looking at my brother, who is 14 now, I see that he’ll need totally different, more engaging, more insightful work to really interest him, and he’ll need much more information. I find it urgent, at least for my personal practice, set the goal far beyond the actual developments we are facing now. That would be the ideal solution, to try to predict what the future audience requires, how to engage them, and how this could eventually develop. This approach brings a whole new universe of connections and possibilities.”