Everything changed in the digital revolution 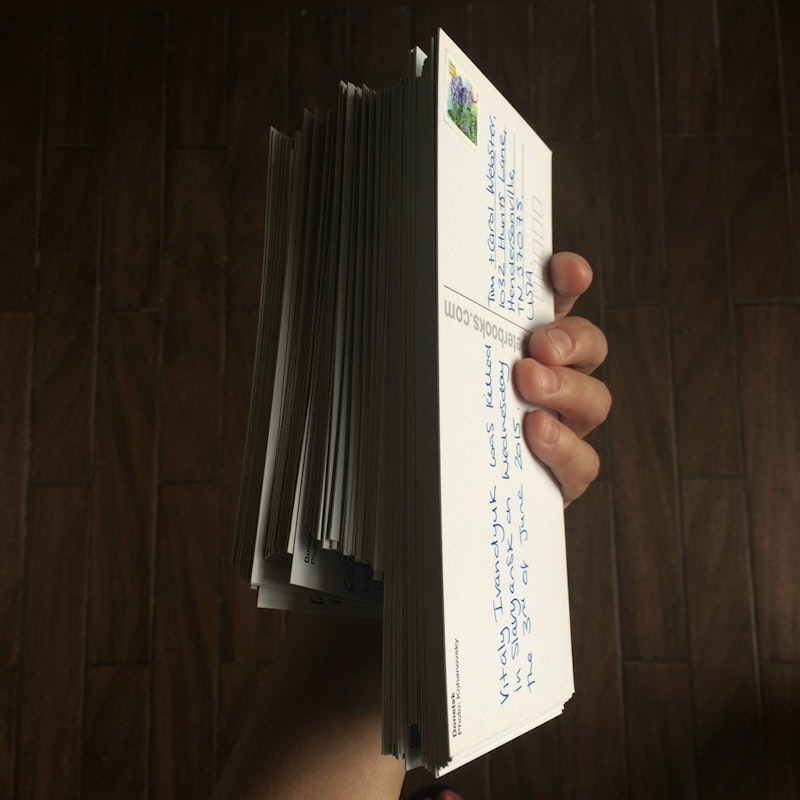 I’m half English and half Swedish, and recently moved back to Europe after living in the US for two years.

Photography is for me one way in which we tell stories about other people’s lives, and our own, and the world, to people who haven’t experienced those things. But it’s just one way. Sometimes I use pictures—my own but also other people’s—sometimes text, sometimes video.

“Twenty years ago, when I decided I wanted to become a photographer, I saw it, in my teenage mind, as a solution to violence and injustice in the world, part of the answer to social challenges, to poverty, war and conflict,” says Anastasia Taylor-Lind. “But photography—photojournalism or documentary photography—wasn’t able to fulfil all of the expectations I had of it to change the world. It can play a role, but my perceptions and expectations of it have changed.”

Anastasia is in Finland, preparing for the Visual Storytelling and Beyond workshop, which focuses on the state of photography, the relevance of storytelling, who the photographer of tomorrow is, and what that photographer needs. Storytelling is still important to her. “Storytelling is innate in us as human beings,” she says. “It helps bridge the gap between other people’s experiences and our own. Stories help us understand the world and our place in it. That’s what really engages me in photography now.”

The essential question is how can I tell the story most effectively. It might be using traditional analog film, or Instagram or social media.

For Anastasia, this approach means a move not only into other visual media, but a shift across disciplines. She wants her decisions about how she tells a story to be in the service of the story itself—and that questions even the need for thinking in terms of disciplines. “The essential question is how can I tell the story most effectively,” she says. “It might be using traditional analog film, or Instagram or social media; it might be using my own photographs, or somebody else’s; I might make sound recordings or videos, or write postcards.” Her Welcome to Donetsk postcard project is a case in point. “I don’t have the answers,” she says. “I don’t think I can stop the war in Ukraine by writing postcards, but then we can’t stop the war in Ukraine by photographing it either. In fact I’m beginning to wonder if war photographers, by glamorizing the thing we set out to oppose, aren’t more complicit in perpetrating war than ever we are at stopping it.”

The change in Anastasia’s personal thinking intertwines with the wider transformations of the digital revolution. “There are fewer constraints now,” she says. “We’re not limited to one medium, the decisions that we make can be in service to the story. Why not use whatever tools you have at your disposal? The digital revolution gave us a whole lot more storytelling tools to use.” Photography, especially since the advent of the smartphone, has become more accessible, more democratic, and the fact that everyone is now a photographer means that people are now more visually literate than ever. “When people make photographs they learn in the process about reading them too. People also question more than ever what they see, that’s a really good thing too.” This is an important consideration in a world where freedom of access also means a proliferation of fake news; one where groups such as ISIS make very effective use of social media.

Welcome to Donetsk aims to tell the story of the ongoing conflict in Ukraine in a personal way. Anastasia Taylor-Lind wanted to avoid a photojournalistic approach, as the world is already saturated with images of the conflict. Instead, working with Alisa Soplova, a journalist from Donetsk, and a group of Ukrainian volunteers, she sends tourist postcards to people all over the world. Each card depicts an idyllic image of Donetsk, the capital of the eastern region of Ukraine before the war. Handwritten on the back is the name of one of the nearly 10,000 people killed in the conflict so far, and the date and place they died. The postcards are picture-perfect images of the city before the war: lamp posts glow, perfectly preened rose beds and manicured gardens sit next to rivers. Often there’s a couple who observe the view, much like the shepherd in the European tradition of landscape painting is a stand-in for the viewer. In stark contrast to the devastated Donetsk seen across the media, this could be any European town. Anastasia aims to bridge the gap between what we think war looks like and where we think it happens. She makes the point that conflict is so often depicted as something exotic and otherly, distant and foreign. War taking place somewhere else and happening to other people somehow serves the purpose of reassuring us that all is well with ourselves, but in reality war is personal and all around us. Anastasia has sent over 2,000 postcards to addresses in more than 60 countries. Her ambition is to keep recording the dead in this way until every name is listed.

Anastasia is still looking for people who want to participate in the project. If you would like to receive a postcard in the next batch, send your name and address to: [email protected] You can also support the project, which has been entirely self-funded, by making a donation here: www.welcome-to-donetsk.com.

I don’t know if we will always have documentary photographers or photojournalists, as a profession.

The liberation of storytellers to use multiple media and disciplines also means being creatively open-minded, not only about the ways stories are told, but the roles of the storytellers, too. “I don’t know if we will always have documentary photographers or photojournalists, as a profession,” says Anastasia. “The industry might not always exist. It might not need to. I don’t know if the idea of the ‘professional photographer’ will always be here. That’s kind of exciting. It is interesting to see what it evolves into.”

Now photographers can bypass gatekeepers, can put work online and reach an audience quickly and easily.

Everything changed in the digital revolution, says Anastasia—the way we make images, the way we share them and the way we consume them. The financial model the print media was based on has been decimated, and in the process the control exercised by gatekeepers has been loosened. “That is about power, and colonialism in a way as well,” says Anastasia. “Who were the gatekeepers? Who was it who said ‘yes that news is right, that is not’?” As a freelance photo journalist it’s very easy to believe you are the one generating story ideas, deciding what’s important to tell, but in reality you are working for an industry that demands pictures, feeding a market that demands a certain thing. “My experience on assignment is not to go and see what I see, it’s to go and illustrate a story that’s already been told, with an agenda that’s been given to me by my editor. That disturbs me. Quite literally photographers are paid to document other people’s lives and often other people’s sufferings. There’s something very troubling when you strip all of that away: I’m paid $500 a day to photograph somebody else’s misfortune.” But now photographers can bypass gatekeepers, can put work online and reach an audience quickly and easily. They can serve the story itself.

What we need is different stories about different people in the world, told in different ways.

So, what will Anastasia say to the young photographers she’s about to engage with in the workshop? What tools do they need to deal with the world they are being thrown into? In a sense, she says, the advice is the same as it always has been: keep taking photographs and don’t stop. But what is really required now is diversity. “What we need is different stories about different people in the world, told in different ways,” she says. That means diversity of storytellers, diversity of media and discipline, diversity of perspective: telling people something new. “Editorial photography is very good at confirming what people already know. Our task is to find a way to challenge what people know or think. Technology and the digital revolution has gifted us with so many more ways to do this, and also to make photography more accessible, reaching more people in different places.”