A Playlist for Photography

A conversation with the winner of the Viewbook Grant Guy Martin and Claudine Boeglin. 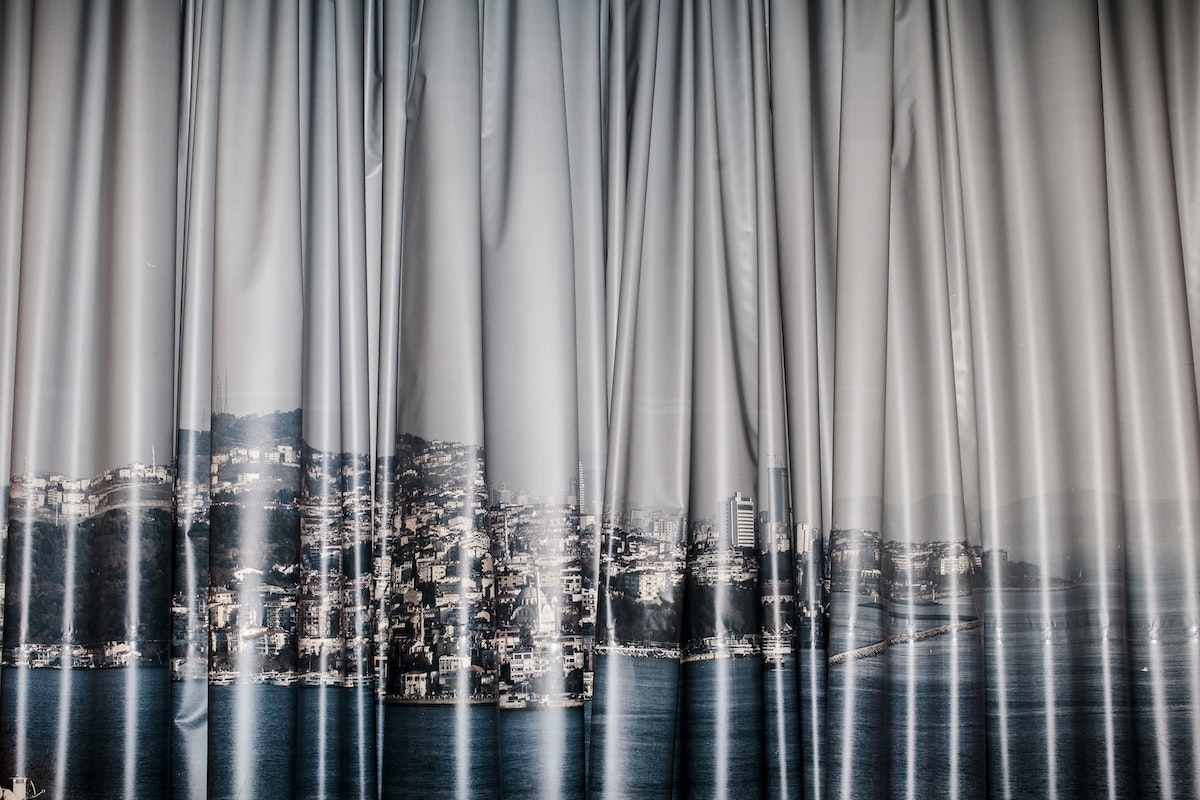 A curtain that doubles as a backdrop for Istanbul on lower production soap operas that cannot afford to move production to an outdoor location in the city. Film/Tv production studios, Balat, Istanbul, 2013” From the series The Parallel State (2012 - 2017) by Guy Martin.

I am Guy Martin

I come from Cornwall, in the southwest of England.

Photography is for me asking more questions than giving answers.

I am Claudine Boeglin

I come from Alsace, in northeastern France.

Photography is for me technology and authorship. A visual alphabet to frame moments into stories. More than ever, independent photographers are the visual essayists investigating the real—and often the surreal. I’m interested in visual content and its architecture; so in finding the right technology for the right content.

With startling images from soap opera and street protest, Guy Martin’s work, The Parallel State, focuses on the duality of modern Turkish life. It is about the interplay between fact and fiction in what is a highly visually literate society, with access to a wide range of media. The work raises questions about the role of photography, and presents an exciting challenge to find an entirely new form of digital presentation: a challenge taken up by Claudine Boeglin, and receiving first-step funding from a Viewbook grant.

How can you understand a story when you don’t have a simple narrative about who is the good guy and who is the bad guy?

“The Parallel State is about two worlds in Turkey,” says Guy, “the fictional world depicted on its soap-opera sets and in hugely famous drama series, and the reality of the political violence and struggle for power that has existed in Turkey for the last five years. For me, the central theme of the work is a visual journey through these two worlds, where you’re not sure what is real and what’s not—and that asks a big question about documentary photography: who do we trust?” Can we trust a photographer to tell the truth simply because he or she is holding a camera? Are people in real-life scenes—in protests, or even in conflict situations—in some way (no matter how small) performing for the media? “How can you understand a story when you don’t have a simple narrative about who is the good guy and who is the bad guy?” says Guy. “I’m not giving any answers. I’m hoping the audience can come to their own conclusions.”

Guy points out that the idea that Turkey is being run by a secret ‘parallel state’—by powers outside its control—goes back to the founding of the nation in the 1920s, and is deeply embedded in the national psyche. “Once you know that, once you have a bit of context, everything becomes shape-shifting, nothing is simple anymore,” he says. Nothing can be explained with a simple truth. Whose truth is the most valid? What the West is experiencing in the aftermath of the election of US President Donald Trump, through Brexit, the rise of nationalism and the burgeoning of ‘alternate facts’, Guy believes are issues that have confronted Turkish citizens and politicians for many years. His work is commenting on this inter-layering of fact and fiction. It can be seen as a metaphor for this complexity.

This is not a story, it’s a multi-layered series of stories.

“That’s what intrigued me when I first heard Guy introduce his story at the World Press Photo master class in 2015,” says Claudine Boeglin. “He said, ‘this is not a story, it’s a multi-layered series of stories’, and immediately my antennae began to twitch. I think that today everything is in layers; we live in a hall of mirrors in which information bounces and at times distorts.” That meeting led to a collaboration in which Guy and Claudine are trying to discover a new form of digital platform that can fully engage an audience with this multifaceted approach. “Guy with his work has captured the Middle East theatre, both with evidence and metaphors. His work prefigures other forms of autocracy in the Western world. That is the story we are trying to tell,” says Claudine.

Photography online is still really in its infancy.

Traditional photographic narrative, running sequentially, does not seem up to the task. Even digital presentations are often constrained by a click-through slideshow. “It is impossible to add the layer of contexts, the depth of caption, the flitting between two worlds,” says Guy. “In that sense, photography online is still really in its infancy.” Claudine says she thinks it’s more dramatic than that: thumbnails strip photos of context, meaning, and eventually depth; slideshows, YouTube and linear film have just one narrative flow, and don’t allow for the many points of entrance that Guy’s project has. “For me, the photograph as an object is the sum of its metadata—information, emotion, sensory experience, and what is left out of the frame,” she says. It’s about what the author felt when he took it, what happened before and afterwards, a wider historical context, how the picture would be interpreted by protagonists on either side.

The platform we create should be the antitheses of the ‘Like’ culture.

How will they tackle this? “For me the lightbulb moment was when Claudine mentioned the word ‘Spotify’,” says Guy. Everyone has their own interest in an image, and this is the experience he and Claudine want to build. Claudine explains: “Imagine Spotify in a visual form. You could experience different journeys through series of pictures with different playlists, allowing you to interact with different narrations, interpretations and digressions.” That of an historian, perhaps, of the photographer, or comment from a novelist—but also a random navigation that throws up unexpected associations, and engages the audience. A photograph becomes a pretext to speak about wider issues involved in the story. “The point of entrance is the image,” says Claudine. “The voices unfold layers and layers, but this happens because the picture has been taken, because that moment has been composed and captured. The photo has a ripple effect.” Platforms such as Instagram, which present only a sequence of images, are too constricting. Guy and Claudine want to add a series of narrations as an essential component of the images. “The platform we create should be the antitheses of the Facebook culture, of the ‘Like’ culture,” says Claudine. “It has to be a journey and an explanation. The more you gain in depth, the more you learn and the more you eventually question, rather than finding a quick answer.”

Current platforms and online possibilities for photographers and documentary makers don’t yet appear to offer a solution for this. “I think the reason photojournalists and photographers get so scared by the word ‘multimedia’ is that most of it is so lame, because it sticks to a cinematic format,” says Guy. “Claudine fundamentally understands the power of photography, of finding a platform that uses photography as its primary base to communicate a story, and not to fall back on the old dot-com, web 2.0 ideas of multimedia.” Claudine adds that she would like to do away with the term ‘photographer’, because it links to the camera and not the thinking, and that the photographer should really be a visual essayist, building a story that may not be immediately palpable, that has no quick answers, one that might develop in time. The Parallel State prefigures the acceleration of nationalisms. It’s a story without an end, an ongoing conversation that involves the audience as well, and that is fundamentally what the web—with its hyperlinks, multi-windows and ongoing flux—is all about.

The Parallel State is a transmedia project, which, in addition to the online presentation will include a book and an exhibition (which will premier in Les Rencontres d’Arles this year). But Guy and Claudine’s ambition remains to invent a new digital platform to carry it, and that means taking a step beyond established forms. “We’re talking about a fundamentally new architecture, a new way of thinking,” says Claudine. “The hardest job I have at the moment is to break the mental borders of the tech world.” The Viewbook Visual Storytelling Grant offers them a first stepping stone in that direction. “The award was the first time I felt someone believed in the idea,” she says, “and that was huge. It was an important moment: you had understood it.”

Photographers have to acknowledge that there is a reality on our screens.

By including a fictional world in its focus, The Parallel State acknowledges that there are multiple realities. “Photographers have to acknowledge that there is a reality on our screens,” says Guy. “This is something politicians realize. This online world is just as important to power as it is to anything else. Once photographers recognize this and find a way to incorporate it, then we have a way of interpreting the very complex world we live in.”